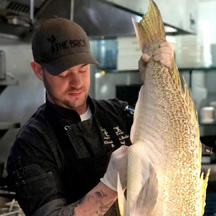 Chef Christopher Beebe is a Malone native migrated back to the North Country to take on his own venture at The Pines Bar and Restaurant. Christopher was born and raised in Malone, NY and began his culinary career at the age of 15 at a local restaurant. After a few years of working in the culinary field, Christopher attended SUNY Potsdam and received a B.S. in Anthropology and Sociology. Upon Graduating, he made the decision to attend culinary school and pursue his passion of food and culinary creativity. Christopher attended the Auguste Escoffier School of Culinary Arts in Boulder, Colorado, a Farm-to-Table focused program. While honing his skills, he also gained valuable experience in the Denver/Boulder food scene and then decided he wanted more. Upon completing culinary school, Christopher then packed his bags and went on a European culinary excursion.

Starting in Germany, Christopher worked for one of Germany’s top chef’s Joachim Muench at the Restaurant Zum Ochen in Mosbach, Germany. After some time there, he ventured to a 4-Star Hotel and Restaurant located nearby and set inside an 11th century castle; The Hotel-Restaurant Burg Hornberg. After completing time at the castle, Chris spent a few weeks exploring other food cultures and checked out food scenes in Prague, Czech Republic and Brienz, Switzerland. Furthermore, the last month in Europe was spent at a Farm-to-Table style hotel and restaurant on the Swiss Border.

Once he completed his time in Europe, Christopher found a home in Miami to start his culinary career.

Chef Beebe was given an opportunity at a new Farm-to-Table style concept as a line cook to showcase his skills and his passion for the industry. After a month, Christopher was promoted to Sous-Chef, and another 6 months later, promoted to Executive Chef. In this position, Chris had the unique opportunity to work with James Beard Award winning Chef Allen Susser. Working closely, Chris developed valuable skills not only as a chef, but as a entrepreneur and businessman as well. After launching 3 different seasonal menus and helping his restaurant become a local staple in the downtown Dadeland food scene; Chris was given an opportunity to purchase his own restaurant in his hometown of Malone, NY.

As for The Pines, Chris plans to introduce new flavors and dishes as well as keep some local favorites and comforts.

Off Site Catering and Bar service is available, fill out a request form

Great food. Eat there a few times a month. Love trying their specials. Always fresh food. Even something as simple as french fries, the best in town. Good portion sizes. Some people may complain their prices are too high, but in my opinion they are fair for the quality of food you get. Sauces are made from scratch, not from a bottle like other restaurants. They use cheeses like gruyere, not processed cheese or…

Waitress was great, tentive, and friendly, food was very good, price was reasonable. Had country charm, went to go back when large fireplace is going, also has a small outside fire pit. Cozy place. Gets crowded fast

My co workers and I ordered lunch from The Pines for lunch this week, and it was delicious!! We all enjoyed our lunch and it was delivered quickly! We will be ordering from them again soon!

If you are out, U must try the pulled pork poutine. It was so good.

We order at work all the time. The homemade chips are my favorite!

Great food, but it seemed slow to receive our lunch. I will go back there again but definitely only when I have more time and don’t have to hurry to eat.

Maple Cajun wings and pizza were both delicious! Absolutely recommend calling the pines! 😀🍕

the food is absolutely amazing!! haven’t had one bad thing!

The Pines Tap and Table is a quaint bar and restaurant that is focused on local and fresh made to order meals, micro brews on taps and a variety of entertainment that include dj's, bands and community events. Catering for in-house events and on-site bar and food.